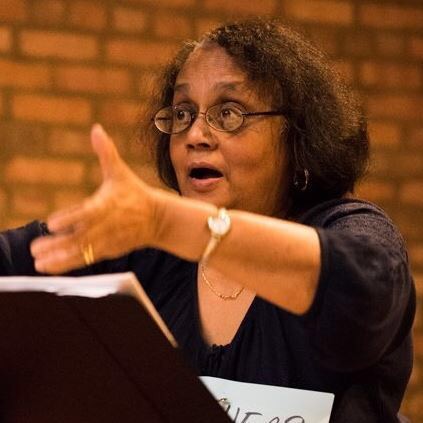 Morgan Park Presbyterian welcomes our new Director of Music, Dhilanthi Fernando! As Director, Dhilanthi will direct our Chancel Choir, lead music in worship, and collaborate to develop musical and worshipful experiences with the congregation.

Born in Sri Lanka, Dhilanthi has spent most of her adult life in the Chicago area which she calls home. A long time resident of Hyde Park, where she completed graduate studies in musicology at the University of Chicago, Dhilanthi has recently moved to Oak Lawn (“My dog needs a yard!”). She is a classically trained pianist who is also a choral director and educator. Dhilanthi recently retired from The Chicago High School for the Arts (ChiArts), where she was on the piano faculty for several years.

Ms Fernando hails from a family of church musicians, and she expresses her faith best through music, which is evident in the many roles she has played as a church musician in four countries – Sri Lanka, India, Switzerland and the USA.

Dhilanthi is the founder/director of Le Cantanti di Chicago, a women’s choir based in Hyde Park.  One of the choir’s highlights was to perform at the Kennedy Center in 2017, at the Serenade! Festival, honoring President John F. Kennedy on his 100th birth anniversary. They plan to return to Kennedy Center this summer as well, to participate in the same festival, this time celebrating the centennial of the ratification of the 19th Amendment, while paying homage to six suffragists, including Chicago’s own Ida B. Wells. Le Cantanti has been selected to perform the world premiere of a newly-commissioned song honoring Ms. Wells at the week-long festival.

Dhilanthi looks forward to starting a satellite group of Le Cantanti in the Oak Lawn/Evergreen Park/ Beverly/Morgan Park area. (Please visit www.lecantanti.org if you are interested in joining them as they explore the rich repertoire of both original and arranged songs for women, many of which are also by women composers.)

Ms. Fernando is married to Rev. Dr. Shanta Premawardhana, President, OMNIA Institute for Contextual Leadership (formerly SCUPE) and has 3 children: Charith, a musician based in the Bay Area, and founder of Classical Revolution; Devaka, who teaches world religion and anthropology at Emory University, and Amali, a string music teacher in the Greenwich CT public school system.

Committed to Christ, Diversity and Mission

We are a diverse multi-generational church family in the Presbyterian Church (USA) providing a loving community and prophetic voice for the Beverly Morgan Park area.  All are welcome in this place!

We gather for weekly Sunday worship at 10:30am and have a Sunday School class for adults and children at 9:30am before worship.  We seek to grow through bible study, contextual sermons, and opportunities for mission.

Our congregation has been serving the Beverly Morgan Park community for over 125 years!  We have been a voice of inclusion in this community and represent the diversity of our current context.  Click here to learn more!

We seek to serve the needs of our congregation through the leadership and service of a committed staff.

Pastor Ben was ordained into ministry to our congregation in 2017 and has experience in chaplaincy, community development and peace organizing.

Contact Pastor Ben for spiritual care needs or to share your interest in any of our congregational ministries.

Dhilanthi is a classically trained pianist, dividing her time between performing, teaching, and choral conducting. She is the founder/director of the women’s choir Le Cantanti di Chicago and continues to teach throughout the city.

Dhilanthi directs our Choir, supports the Children’s Choir and leads music for each worship service. Contact Dhilanthi if you are interested in joining our music ministry.

Juanita has been serving this congregation for many years and is deeply connected in the community.

Sam is contracted as our janitor and provides handyman services in the community.